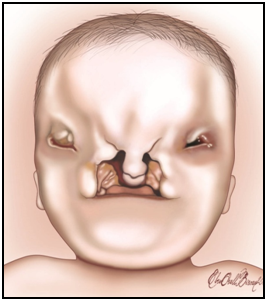 Craniofacial lesions
ALX1-related FND is one of a group of dysmorphic syndromes called frontonasal dysplasias, that affects the facial morpholgy, with an emphasis on the midline facial structures — especially, palate, nose, frontal bone. ALX1-related FND appears to be on the severe end of the spectrum of frontonasal dysplasias as long as the facial dysmorphology is considered. To date, eight individuals from three families have been reported to have ALX1-related FND. The common facial features in these individuals are the hypertelorism with wide nasal root, upslanting palpebral fissures, broad nasal base and hypoplastic alae nasi. The dysmorphic features could include extreme microophtalmia, blepharophimosis, low-set ears, facial clefts, cleft lip/palate, brachycephaly and cranial bone defects. A family with milder cases was reported (Ullah et al. 2017). As an additional nonfacial finding vestigial tail without any osseous structures have been observed in some affected individuals.
Speech delay can occur as a result of facial dysmorphic features and mild intellectual dysability has been reported at least in one individual. It has also been shown that midline intracranial structures such as corpus callosum and cerebellum could also be affected.

Radiological findings
The radiological examination of facial and cranial bony structures is important and may reveal defects not detectable by physical examination. Especially, Computed Tomography (CT) scans of head and 3 dimensional constructions are important for detailing the bone defects and planning for surgery. Magnetic Resonance Imaging (MRI) may be important to show central nervous system anomalies such as absence of corpus callosum and should be performed in every affected individual. Ultrasound during pregnancy can be helpful in prenatal diagnosis and determining the extent of malformations.

Variable expressivity
The severity of the clinical features is variable among individuals with ALX1-related FND even in siblings having the same ALX1 mutations. For the time being, it is not possible to predict beforehand how a certain mutation will affect the facial development. However, dysmorphic features can be investigated prenatally.

Prognosis
In none of the affected individuals observed to date, ALX1-related FND lead to progressive defects. However, the facial dysmorphology and possible central nervous system defects can lead to developmental delay and intellectual disability.